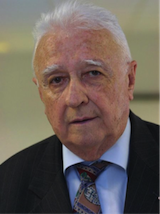 Louis Lareng was born on April 8th, 1923 in the village of Ayzac-Ost, at the foot of the Pyrenees, in the south of the Gascony region where he spent his childhood and kept all his life this typical local melodious and gravelly-sounding accent.

He goes on to study medicine in Toulouse and practices the medical profession throughout his life within the city’s hospitals. He is an anaesthetist-resuscitator, a discipline that he also teaches as Professor of Medicine.

As pioneer of the emergency departments in France, he was the creator of the Emergency Medical Service “SAMU” (Service d’Aide Médicale Urgente) in 1967 and continued to advocate for the legal recognition of this organization by law, which finally happened in 1992.

Prof. Lareng was founder of the University Paul Sabatier in Toulouse, and recognized as Professor Emeritus from 1992. It is at that time that he takes up the cause for telemedicine, a virtually unknown discipline in France in those days, which he will bring to the highest political levels – with determination and stubbornness – until the recognition by the laws of 2004 and 2010, the so-called HPST law (hôpital, patients, santé, territoires) of which the article 78 – the real birth certificate of telemedicine in France – bears his proverbial signature. To get there, he had to make himself heard and then listened to in all relevant political and technical circles, who often had difficulty in following this unconditional enthusiast.

In his region of Midi-Pyrénées, at first with the Public Interest Group ‘Telemedicine Network’ (Groupement d’Intérêt Public (GIP) Réseau de Télémédecine) in 2003 and then through various responsibilities up until the administration of the Health Cooperation Group ‘Telehealth Midi-Pyrénées’ (Groupement de Coopération Sanitaire (GCS) Télésanté Midi-Pyrénées) since March 2011, Louis Lareng implemented telemedicine and telehealth, and ensured the best possible applications.

The creation of the European Institute of Telemedicine, of which he is the Director, and of the European Society of Telemedicine and eHealth, of which he is the President, allowed him to make his work and realizations known throughout France and beyond the French borders. Considered as one of the pioneers of telemedicine in the world, he is a member of the editorial boards and review committees of numerous specialized journals in the field. He is author of 896 publications and communications which are even more milestones and proof, if need be, of his various medical activities throughout his long career, which still continues today. He has been President or member of numerous scientific societies. In particular, he was one of the founder members in 1997 of the International Society for Telemedicine (ISfT) and a member of the board of this same society – which in the meantime had become the International Society for Telemedicine & eHealth (ISfTeH) – from 2007 till 2009.

However, Louis Lareng is not only a physician with continuous commitment to the best care for his patients, he is also a man who is actively engaged at various levels in the social and political life of his own town (of which he was mayor), of his region (he was deputy, local councillor and regional councillor), and of his country (he was advisor to Ministers of Health). At the crossroads of his skills, he worked at the Red Cross in his region, and also at national level with the Emergency Preparedness Services, being President of their National Federation.

In reading his life and works, and considering his unwavering commitment to increasing the knowledge about and the use of telemedicine and telehealth by healthcare professionals in their daily practice, it was almost a duty for the ISfTeH, of which he is also still a member, to pay him tribute at this 10th anniversary edition of Med-e-Tel, and to honour him with a special award for his entire lifetime achievements.

Congratulations Prof. Lareng and thank you!