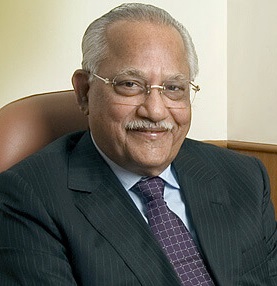 Dr. Prathap C Reddy, M.D, MBBS, FCCP, FICA, FRCS (Hony) is a cardiologist and entrepreneur who founded the first corporate chain of hospitals in India – the Apollo Hospitals Group. He revolutionized the health care scenario of India and inspired others to follow suit. Today, India has over 750 corporate hospitals all over the country. He received his medical degree from the Stanley Medical College in Chennai and later trained as a cardiologist in the UK and USA. He returned to India in 1978.

Starting from a 150-bedded Hospital in 1983, the Group has since continuously excelled and maintained leadership in medical innovation, clinical services and cutting edge research. With a network of over 9500 beds across 57 hospitals at culturally diverse locations in India and overseas, over 4000 top class clinicians and total employee strength of more than 65,000 professionals, the Apollo Hospitals Group is one of the largest hospital groups in the world, being consistently ranked amongst the best hospitals for advanced medical services. These hospitals have served over 40 million patients from 120 countries, with eight of them having the prestigious JCI accreditation.

Dr Reddy has been responsible for  bringing about institutional changes in the private healthcare infrastructure by, inter alia, establishing Apollo Institutes for Post Graduate Medical and Nursing Education, Hospital Administration, Physiotherapy, Clinical Research and a large number of Paramedical Programs. With the setting up of the Apollo Telemedicine Networking Foundation, Health Super Hiway, Apollo DKV Insurance Co. and the Apollo Reach Hospitals, the Apollo Group (primarily identified as a healthcare provider) is today a leading provider of healthcare solutions, inclusive of next generation healthcare IT solutions and services. These have helped establish a modern healthcare network through both in house and outreach services, reaching out to millions of people..He was awarded the Padma Bhushan in 1991 for his contribution to the emergence of the private healthcare sector and his role in bringing about several regulatory changes relating to licensing, import restrictions, organ transplantation, etc. He has received innumerable other awards.  As Chairman of the CII National Healthcare Committee since 2006, Dr Prathap C Reddy constituted sub-committees for drawing up standards for accreditation of Indian Hospitals for the first time in the country did some commendable work in the areas of medical value travel and medical code of ethics. One of the areas of impact has been in the area of budget recommendations to the Government and health insurance. In November 2009, the Government of India honored the pioneering spirit of the Apollo Hospitals Group with the release of a postage stamp.

Dr Prathap C Reddy was conferred with second highest civilian award, the "Padma Vibhushan" in March 2010. This unequalled commendation from the Government of India is an acknowledgement of his untiring pursuit for excellence in healthcare as Apollo strives towards touching a billion lives. Under his  leadership, the Apollo Group has undertaken philanthropic work through 'Save a Child's Heart Foundation' (SACH), the "CURE Foundation" for cancer care, the Indian Head Injury Foundation (IHIF), 'Distance Healthcare Advancement' (DISHA) and many others that have touched the lives of several hundred thousand children, differently-abled people, cancer and brain trauma patients.

He has encouraged the growth and development of the  Apollo Telemedicine Networkjng  Foundation the largest and  oldest multi-specialty Telehealth Network in South Asia. ATNF is today recognized nationally and internationally for its pioneering work in provide remote health care using ICT.  Through several PPP initiatives ATNF is helping the central and state governments to provide quality health care in isolated areas. The Apollo Group has one of the largest IT departments in the health care industry with a very high level of digitization. ATNF an institutional member of the ISfTeH has hosted the annual ISfTeH conference in 2007 and again in 2016.